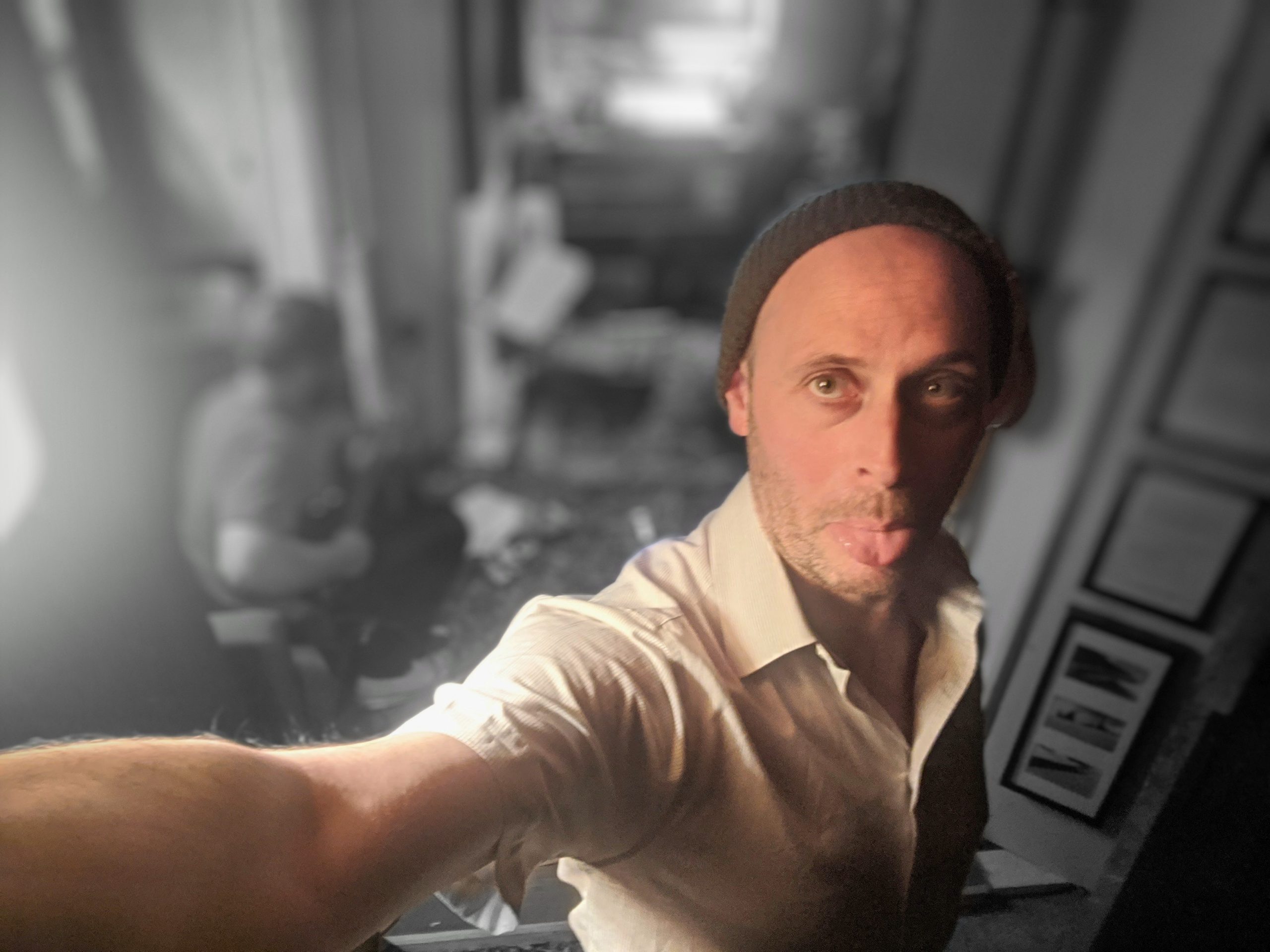 You’ll remember the section in Clive King’s Stig of The Dump where Barney, a pre-pubesant protagonist, stumbles across Stig’s cave (set deep within an old chalk pit) and describes seeing before him:

‘A collection of bits and pieces, odds and ends, bric-à-brac and old brock. There were stones and bones, fossils and bottles, skins and tins, stacks of sticks and hanks of string. There were motorcar tyres and hats from old scarecrows, nuts and bolts and bobbles from brass bedsteads. There was a coal scuttle full of dead electric light bulbs and a basin with rusty screws and nails in it.’

On absorbing the scene, Barney breathlessly exclaims ‘I wish I lived here’.

Actually, you may not remember this passage at all. I hadn’t until I was introduced to Soup for the first time last year, when it all (ok, maybe five words) came flooding back. For me, you see, the music David Turnbull is making as Fax Machine emanates Stig’s very same eclecticism; a well-thumbed scrapbook, a mosaic lovingly pieced together over time.

“I can’t honestly think of a time when I have decided to write a song and actually managed to do it” Turnbull half-jests as we discuss the second LP under this guise – Ouch! – released through Treetrunk this month. “If I start out with the idea that I am supposed to write a song then it just becomes impossible because I’m trying to do it.

“I usually just record lots of snippets of ideas and save them sometimes for months or years. Then when I go back to them I can rarely remember doing it, and it becomes exciting to finish it. I get a real buzz from finishing a 20 second bit of music that I recorded two years ago… there were a couple of songs on the first record that were eight years old just sitting there waiting, like little seeds.”

The excitement Turnbull continues to draw from the writing processes lends an urgency – a wholesome energy – to the latest record that spikes proudly throughout, but is perhaps none more pertinent than in the cry of ‘what a time to be alive’ on Ouch! opener Durts Bozo. This sets the tone justly before tripping into the assured swagger of Motorbike and its absurd, sickly-sweet guitar twang.

Within those opening two bursts you have, as a listener, ventured miles; a whistle-stop tour of a mind most active – one which I’m implored to learn more about.

“Years ago I worked in a psychiatric hospital and I was faxing medical records for hours every day. The machine was so old and if you were on page 65 of a 70 page file and something went wrong then you had to start all over again, page by page. It was so boring. I remember thinking it was actually me that was the fax machine. The band could have just as easily been called ‘printer’ or ‘disciplinary’.”

“I found myself relying on dreams for inspiration. I had a really bad fever one night last year and was in that half asleep, half awake point and was hallucinating and wrote much of that down the next day; three of the songs on the record came from that.

“Otherwise, I usually just let those mumbled lyrics from the saved snippets naturally evolve into words over time. Sometimes they must make no sense to anyone else, which is not intentional, but they remind me of certain things. I am quite interested in knowing how other people interpret them.”

As a listner, I daren’t speak to the lyrical content. How could I possibly interpret a reference to Robert De Niro living underneath a car within an ounce of its intended meaning anyway? I also haven’t heard every record released in 2020, so I am not qualified to judge Ouch! the best (had I, would I even be?). But it is an LP I’ve kept coming back to over the months, to bolster highs and cushion lows.

I absolutely adore the mood of Looserners, for example, its sway raw and barbed before arching to a crascendo bursting with light. “I also really like Looserners, it’s got a strange groove but we did it justice” Turnbull says. “I love the meandering freetime bit in the middle of that song… I had been listening to loads of Still House Plants who are immense.”

“Some other favourite moments from the record are the drum sound we got on Yu-On and the cat meowing in the street outside, which we didn’t hear until a few days later.”

Already richly detailed, it’s astounding to learn that this record would have been further textured were it not for a hard drive failure.

“A few years back a laptop died on me which had five years worth of sketches of songs on it and it was really devastating. I generally just pick a few snippets and start throwing things on without any intention other than to make myself smile or laugh. If something makes me laugh then I just keep going – it usually starts with guitar and maybe some mumbled lyrics then I will add some synths or drums.

“Once [the record’s] gone to print it’s like it has flown the nest and you don’t have to think about it anymore, in the best possible way, after only thinking about it for so long. At that point it’s almost nothing to do with you anymore.”

“Much of it will get stripped off at some point but that’s fine. Sometimes I have to go through that process of finding out an element is not working. The only way to find out is to do it.”

Test and learn, art and craft, the resulting record becomes a patchwork of moments and an activation of ideas in a world where most are beset with the passive drawl of meme.

“A demo can evolve through many permutations before it’s finished into something you hear on the record, but in the same breath as that I have used original demos as the final article for a few songs. It’s just song specific. What I don’t like doing is trying to recreate a feeling or vibe which is only there on a demo. Better off just using the demo if it has something about it.”

A nice example of this approach can be heard on DIY, which is the third track in the Ouch! running order. It is at once brittle and brash, and at times seemingly held together with Scotch tape.

“I really like the guitar on DIY – I was helping my friend move some things from his grandma’s garage and there was an acoustic guitar in there with 4 strings that had been there for 15 years in some crazy tuning. I just used that straight away without changing it at all. That was literally the first thing I played when I picked it up. Always makes me wonder if it had the song stored in the wood somehow for 15 years.”

DIY offers a reflective moment – aside an early pause for breath – and, for me, it optimises what this project is all about.

Turnbull kept the same company and the same setting for this record as with Soup before it, but the approach was notably different this time. “With Soup there was a definite proactive attempt to make the record get weirder as it progressed as that was how I heard the album in my head for years. I also really like albums that move somewhere from where they started.

“I guess Ouch! does do that to some extent, although this time it was not intentional, and I think the new album is not as layered as Soup. I wanted Ouch! to be more up front and not have any hidden sounds, so we definitely did fewer overdubs and tried to stay true to the vibe that the song dictated early on.

“I’d agree that writing is escapism, and it never ceases to amaze me that a daydream or something you hum under your breath can be explored and eventually enter the real world on vinyl ready for its new home in someone else’s head. It’s nuts. It’s also mind blowing that you can find people who will assist you in this quest!”

“I lived with Will Thorneycroft who produced it so it was just a case of ‘let’s get started’ whenever we feel ready. We are both in The Dawdler and I play in Lovely Assistant and Black Shape so there are always other musical things going on in the meantime to keep us busy.

“I think we have actually released four albums that were recorded largely in this house in the last two years. When you live with a producer you find that if you have an idea that is good to go then the mics are up before you know it and we just get straight into it. It’s been a really great way to work with zero pressure. Also, late night, tipsy mixing sessions are highly recommended.”

I suspect one of these sessions lent Scole Group its unique pomp, which stutters crunchingly before bleeding into a riff matching Nitkowski’s finest.

“For Scole Group I pretty much had the structure in my mind the whole time before we had recorded any of it. I wanted to write a horror story in a few lines and have a massive freetime spooky ending and I wanted it to sound stretched and pulled apart. Shaun who played drums on that one absolutely blew us away when we recorded that. He just got the idea. I really like that track, and I’m really pleased with the collapse of that song.”

Turnbull is a prolific musician. Aside the aforementioned Black Shape, Lovely Assistant, and The Dawdler, he also performs in beloved Okay Champ. “It’s a nightmare remembering the names of the songs”, he admits wryly.

“I suppose every band I am involved in does scratch a separate itch. I get the heavy riffs from Black Shape, the ethereal dreamy pop from Dawdler and the revivalist vibe from Lovely Assistant. With Dawdler I can really relax and come off stage super chilled which is not something I have had before.

“With Okay Champ I guess it was the opposite. I was just trying to add some loud noises to what was already there. John [Edgar, bandmate in The Dawdler and Okay Champ] is really good at writing complete songs so the direction of the music is already apparent by the time I add anything.

“I suppose with Fax Machine I get to just throw some sounds out and see where they land. I’m really lucky at the minute to be able to play with the musicians I am playing with.”

David remains hopeful, as we all do, that live gigging will begin again next year. This would allow him to perform any of Fax Machine’s tracks in public for the first time.

“I will definitely do it live at some point. It’s just choosing the right time when I can completely throw myself into it, so I will wait for a gap in between other projects – I’ve got two new Black Shape albums coming out in 2021 and the Dawdler album too so plenty to be cracking on with.

“I had kind of shied away from the idea of doing it live previously as I didn’t want to mess it up, which is ludicrous as that’s exactly what I need to do numerous times to get it to a point where I feel it’s something worth playing for people. Maybe the first gig should be free in case it’s really bad?

“Actually, I might just set up on the town moor and see what the response from the cows is.”

Ouch! is out now on Treetrunk Records. Get it through Bandcamp.