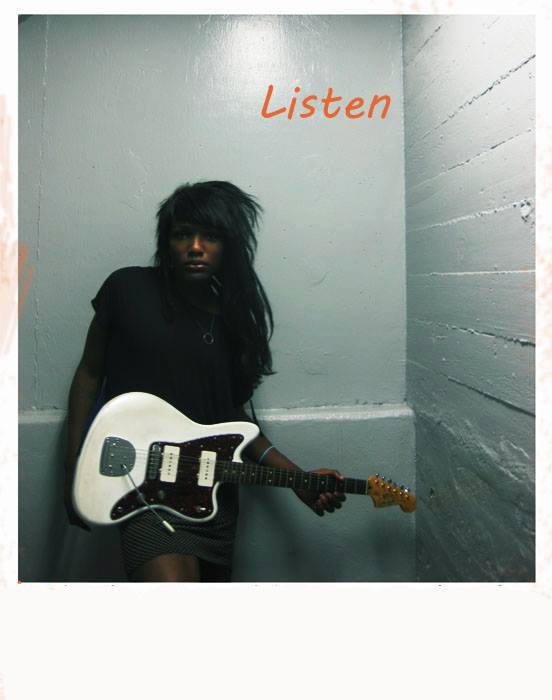 To the casual onlooker, Naia Izumi is the complete product; effortlessly cool, innately talented, going places faster than we can hope to sprint. But she is, really, the antithesis of all this. She’s had to do everything the hard way, ducking each and every punch, all the while retaining focus and keeping it real. I wanted to know more…

“To me it’s not really DIY. I simply do what I have to do because I’m very specific, yet I grew up in a poor family so by nature I make the most of what little resources I have. In my eyes every moment is a new moment to me. I’m just here doing what I have to do.”

Naia Izumi I grew up in Columbus, Georgia. I had a really rough, abusive childhood so I don’t have many good memories except for the moment I learned to overdub myself with two tape recorders and a Casio keyboard to write music when I was six.

I moved to LA about three years ago. I didn’t realy think of anything, I just wanted to find somewhere to perform and make some money. I’d tend to stay in my own bubble. I’m on the autistic spectrum, so I get over stimulated easily if I’m not focused on something. I don’t smoke, I don’t drink… Sometimes, once in a blue moon if someone offers, but other than that I’ve never been interested. I just make music and art and think…

I’ve been drawing ever since I could pick whatever I could use to draw it with … I just do it that’s all there is to … I’ve never needed any direct, outside inspiration for anything. I make what I want when I feel like it.

I’ve always just been open to everything around me from whatever random music playing in a store or restaurant, people talking, nature sounds, trains, cars… it’s all music to me. I’ve never owned another artist’s tape, cd or anything. I just appreciate whatever is around me and take what I enjoy from it.

A typical day? Wake up… run through my practice regime, go perform on the streets to make what money I can to eat with and pay my rent. For five hours I only make $5 an hour… pretty sad. Come back to work on some new songs and look at random youtube videos and answer emails, do it over again the next day.

I met my band online, and I just so happen to like playing with them. When I record, I sit in a dark room alone with a laptop, my guitar, bass, some random percussion and cheap two channel interface and do it. Some of the songs are five years old, some I wrote the same day I recorded them, some are a few weeks old, some are even older. I’ve been doing it this way since I was six, overdubbing with two tape recorders, so I’ve been doing this for a little over 25 years. I never really had many friends so I just made music and kept it to myself.

To me it’s not really DIY. I simply do what I have to do because I’m very specific, yet I grew up in a poor family so by nature I make the most of what little resources I have. In my eyes every moment is a new moment to me. I’m just here doing what I have to do.

I’m not gonna tell you why and how, that’s just too much typing! But I did mention a little bit to Guitar Player magazine which will be in their August issue… You can subscribe to my Youtube channel to find out more… I’ve never had a bad experience…

I will share one thing… Instead of maxing out certain effects, it’s a good idea to stack a similar type of an effect… for example, you can stack two different types of overdrives with the drive knob 1/3 of the way up for a more unique and clear drive sound.