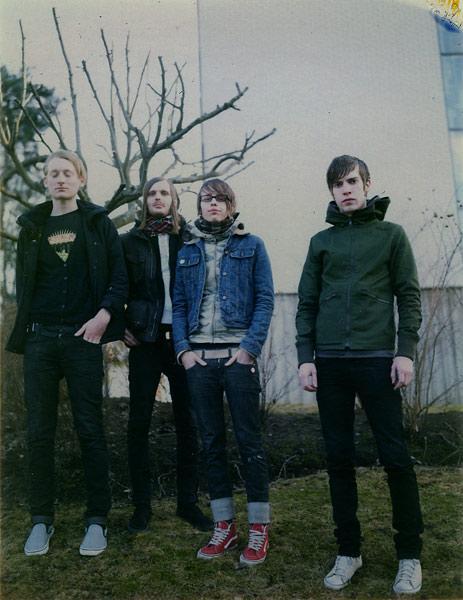 Uppsala, Sweden (with its winters routinely plummeting to -7°C) is some 1,219 miles from London, however Jeiferever find themselves covering such distance in support of their third studio LP, the truly soul-cleansing ‘Silesia’. As an entity, the record aches, provokes, intrigues and delights in measures synonymous only with real beauty, while, as a journey, there’s an astounding cache of influence and personal struggle clambering brethlessly to the fore.

You can pick up a copy now via Monotreme, and indeed you should, however in the meantime Kristofer Jönson, Martin Sandström, Olle Bilius and Fredrik Aspelin have welcomed the prospect of painting a fuller picture for prospective listeners by documenting the themes and process behind each track, exclusively for TV is Better, and lovingly provided to you.

Fredrik: Probably my favorite song of the album. For me, Silesia sat me off in a new direction. It was kind of an eye opener and made me really inspired to try out new stuff. It was more rhythmic, darker and I liked the simplicity of the song. Everything sounded great from the beginning. I think that if we hadn’t come up with Silesia the whole album would have been very different. I’m glad we managed to preserve what sounded so great in our rehearsal space and to put it on tape.

Kristofer: Probably my favorite track of the album too and one of my favorite Jeniferever tracks ever really. One of those songs that kind of writes itself. The songs I like the most are always the songs that get the strongest topics for lyrics and this one is about the day when I found out that my dad had died which makes the song mean even more to me. The name is taken from an older name of the Berlin Ostbahnof train station. I wanted to name it after something that was in the surrounding of where I was when I found out that my dad had passed away and also liked the idea of naming it after a train station since it’s a place of movement, a place for arrivals and departures, a place of meetings and farewells.

Martin: With this we tried making everything very rhythm based so i play with a delay set to the tempo of the song throughout most of the song. I guess this is the closest we’ve ever come to doing something a bit minimalist. It was quite obvious this would be the album opener to me.

Olle: I really like the ending of this song, it was a bit unplanned everything. We made up the bass line and the drums and recorded it during the main recording session in Gothenburg. Then martin recorded a guitar solo at home through a small Samick amp and I recorded the synth part alone in our rehearsal space. I think we were all a bit surprised about how it sounded when we put it together. Didn’t really sound like anyone thought it would I think. But I really like how everyone just drift away in their own direction. A bit chaotic in a good way.

Kristofer: The bass guitar has a bigger role on this album compared to what we’ve done before, especially the more uptempo songs like this one. I really like the way it makes the verses flow together with the quite funky drumming on this particular song. It’s one of those things we’ve played at rehearsals and thought maybe was a bit too cheesy but I’m really happy we kept it. You should never be afraid of working outside the box, you need to challenge yourself and your previous works because it can end up the best songs you’ve ever written.

Martin: The main guitar part was something i had been falling back into whenever I would play the guitar with that specific tuning (a tuning i used for most of Spring Tides). I like how it’s a bit droney and folky but also quite sad. As soon as we jammed on the guitar riff i understood that this would be good.

The Beat Of Our Own Blood

Fredrik: Didn’t use to be as funky as it turned out. We didn’t really know where to go with it before we settled for a new rhythm and then it went pretty fast to finish it.

Martin: The basic guitar riff was always this syncopated thing I’d been playing around with but it took a while before we got it right when playing together.

Kristofer: I recorded the vocals for this by myself at home in my wardrobe the day before we started mixing the album and the piano overdub for the chorus was recorded on my living room piano the same evening. Last minute work as usual but turned out really nice I think. Another of my favorite tracks we’ve ever made.

A Drink To Remember

Martin: For a long time now we’ve used names of places and towns as working titles. This one was called Bremen as I came up with the guitar part in a hotel room there while on tour. I played around with a new guitar tuning and recorded what now is the intro and verse part on my laptop. It was later called Detroit for some reason. We had a lot of problems getting this one together with the different parts and all. I like how it changes after the second verse and gets slightly darker. I always saw this as the epic, wild song but I think none of us had any idea how it would turn out. I usually write a lyric or two for each album, but this is the only song I wrote the words for on this album. It’s about a few different things I guess. It’s about being somewhere or even someone and wanting to be somewhere else or someone else, about leaving because if you don’t you just slowly disappear. It’s also about feeling that you don’t belong anywhere.

Martin: This started as a much slower guitar riff that i didn’t know what to do with. Then we played it faster and more rhythmical so i started playing something else. The only time i play the original guitar part is for the first ten seconds or so. I like the key change into the ‘chorus’ or whatever. I also like the heavier part that kicks in after the seconds ‘chorus’. It turned out good in the sense that it’s the heaviest song on the album, but still it’s quite melodic if you listen carefully.

Kristofer: Another last minute recording was my guitars for this one, they sound really rocky and loud but they’re actually recorded on extremely low volume in my living room not to make my neighbors go crazy. On one of the first rehearsal recordings of this song Martin plays some random guitar thing as the last chord fades out, I always liked the melody he played so I recorded it on piano really fast in the end of the same session as the piano for ‘Cathedral Peak’. A tiny little detail that I like a lot.

Fredrik: The first song we recorded for the album. When we listened to it after the first take I think we were all extremely excited with how everything sounded. Both because we had never before recorded anything in such a great studio as Svenska Grammofon and also it was the first time we recorded a song live so we got to hear all instruments together from the beginning.

Kristofer: Another of my favorites from the album and the only other song that is about the loss of my dad. It’s about me and my family and how all of our lives changed forever over just one night, that it’s easy to loose things that maybe you take for granted. One of my favorite moments of the entire album is the choruses of this one, I really love the way my piano and martins acoustic guitars sort of melt together.

Martin: For some reason i started playing without a pick and doing these (to me) slightly 70’s sounding leads over the verses (and the choruses, but we ended up removing them for most of the choruses). I really wanted this classic slightly distorted guitar sound and just play sort of improvised lines. Back home in our own studio i figured the choruses needed something more so i added some 12- string guitar and two different regular acoustic guitars. It gave the choruses this thick but not too distinct sound.

Where The Hills Fall Towards The Ocean

Fredrik: The oldest piece of music on the album. It started out as a jam a long time ago and it stayed like that. We didn’t know if it was going to be on the album and we hadn’t really rehearsed it but we decided to record it. Took an hour or so, just before we where about to pack up and leave the Svenska Grammofon Studion in Gothenburg.

Kristofer: When we make new songs we always record the parts as we make them at rehearsal so that we wont forget them and often these recordings turn out really nice and it’s always hard to reproduce that very first moment when you play something. So what we did when recording ‘Where the hills..’ was to use the ending of the very first rehearsal recording of it and cut it together with the studio recording from Gothenburg. So the last minute of this song on the album is actually the very first time we jam on that riff back in 2009.

Martin: This isn’t really a ‘song’ to me, it’s more of a little piece of music that gives you a break from the rest of the album. Like this interlude or something.

Fredrik: It started out with Kristofer having this idea for a rhodes based riff. This turned out to be the verse for the song and it sounds almost the same today as it did when we first played it. It came together really fast. But we had some difficulties putting this song together. The second half of the song used to be twice as long, plus another riff that we decided to take away.

Kristofer: This sounds like a cliché out of some old rockumentary of some classic album but that riff we started out with actually came to me in a dream! I woke up and wen’t straight to the piano in my room and recorded it on my cell phone so that I wouldn’t forget it. Writing music works in mysterious ways sometimes!

Martin: Parts of this song just sounded great instantly. I think everyone really found their spot to play in on this one. I use a compressor and lots of chorus and distortion throughout the whole song to make these long sustaining notes. A fun song to record.

Olle: This was the first Jeniferever song ever I wrote the lyrics for, so it feels really special to me. I tried to create images with the lyrics rather than write about a topic but as I wrote I started to realize more what these images meant to me, and for me this song is a lot about what a home is and the people you consider as your family. We also decided quite early that we would keep the verses pretty sparse. If we don’t decide that pretty early we usually fill up every hole in the song.

Martin: The guitar part was something we tried working on between tours while touring Spring Tides. It’s quite simple but i felt we should try and make something out of it. The end was one of those jams we’d just go on playing for ages. I think it’s good that the whole song just changes slowly until the final part. It’s a bit symphonic or even progy but in a good way.