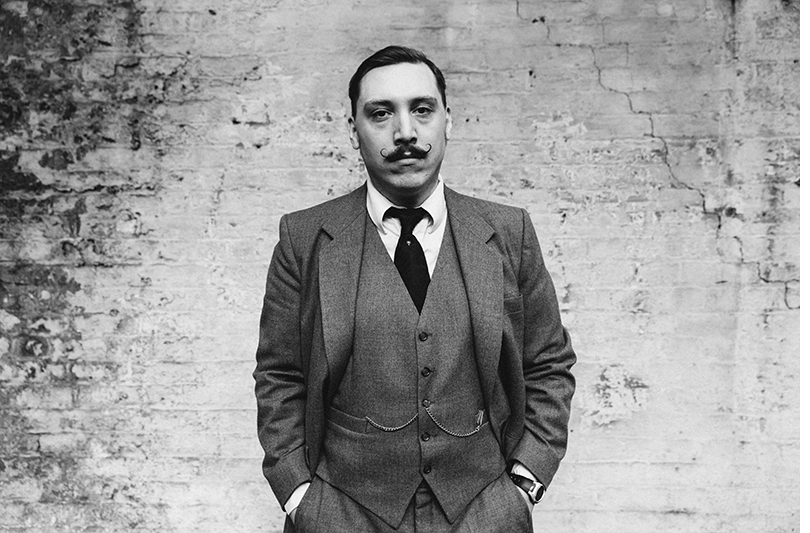 One of 2013’s landmark releases, it seems, has crept in just shy of November’s remaining days… ‘Muscle Memory‘; a real behemoth of a double LP which surfaced in Xtra Mile’s catalogue swiftly and near silently, albeit for a few select tweets and an obligatory Banquet Records in-store. Its architect, Jamie Lenman, is a name which may well ring familiar in your ears, and if not, on concluding the 22-track saga it will be sure to resonate ever-long. Here’s a prologue;

It’s easier to say once it’s been done, but having such a ‘bipolar’ double album is a fucking eureka moment. How necessary was it for you to embrace both facets as a reflection of your personality and art?

Well I’m not sure I would say it was ‘necessary’…it’s not exactly an original notion that one person can be responsible for such varied or indeed contrasting forms of music so I can’t claim divine inspiration. I did it to prove that Foo Fighters needn’t have failed, that it is possible, and to prevent myself from coming back after five years with a record that sounded too similar to my previous one.

The ‘brutal’ half of the record would be the closest resemblance of Reuben, although there are still marked differences for sure. The second half of the LP is certainly a ‘new direction’ for the listener, and I’d assume, for you… how did you embrace the approach to writing big band music, for example. Did it take you out of a comfort zone in any way?

First of all I’d say that there were some very reuben-esque moments on the softer half as well, whatever ‘reuben-esque’ means. I don’t really think anything on the record is light years away from things I’ve done before, just an extension of certain themes. I think those Reuben records are a good grounding, I think if you dig them you’ll be open to lots of different types of music…and here we are! The big band track was definitely a challenge, but I think I was still within my comfort zone. I mean, I was confident that it would work. I had a very clear idea of all of it and I knew how to get there. I had people to help me all along the way, to keep me comfy. From my band who worked out how it would all sound with me, to my old music teacher who converted my demos into a readable score, to my producer Sean who kept me very secure and supported me all along the way…apart from that one day where he had a hangover and I walked out…ha ha!

You’ll have to excuse my ignorance with some of this, but how much work was put into documenting the album – from the writing process to rehearsals to recording, what was the time frame here (the album announcement was very sudden, but obviously there was a lot that went on behind the scenes before September)?

It took four years from first practice to release day, and I didn’t document any of it, apart from the odd scratchy recording from the rehearsal room so we could all remember what we’d done last week. I didn’t even know it was going to be a thing when it started, so I didn’t think about it. When you’re in a band, you’re a product and you look at ways to market yourself and you tend to think in those terms and when we did those videos for the third Reuben album we knew there would be an audience but there’s no product this time, it’s just me, and at the time there wasn’t an audience.

Describe the buzz from the first rehearsal sessions and hearing back the first demos.

It was very exciting to work with a group of musicians who weren’t completely exhausted and at each other’s throats, like the last couple of Reuben years had been. It was all for fun and the other guys were curious to see what I had in store for them and I was interested to see what it would sound like outside my head. The first few rehearsal demos are great, very raw as you’d expect, that’s why I included clips from them on the actual record, to convey some of that excitement.

Given your back catalogue, you’ve clocked up some serious lyrical topics, and as a fan, I find it disarming that you wear your heart on your sleeve. Do you think this is important as an artist and musician? Are there any topics you would shy away from approaching in your music?

I think it’s important as a person. And since I make no distinction between myself as a person and as an ‘artist’ it follows that my songs come across as being like a conversation. There are some topics I would steer clear of, and they’re the same topics I’d be cautious about in person…I’d be hesitant to level criticism or abuse at a particular living individual out of respect for their feelings, even if I do hate their guts…I wish I’d been brave enough to tackle some of the bigger issues that are closer to my heart, like the problem with racism in this country…some of these things are just too sensitive to broach in a three minute rock song. maybe i’ll find a way in the future…I hope so.

Both! haven’t you been paying attention? what record is it we’re talking about here?!?

Fair fucks for landing that Guardian job by the way. Do you still feel you should have gone to university?

Only in the same way that I feel i should have become a ballroom dancer or a stunt pilot, you know? There’s lots of fun options, Uni was one of them, I did some other fun stuff instead. And you know what? Most of those options are still open.

What have you learned from your wife’s trade? It’s an interesting world indeed…

I’ve learnt that is possible to see too many boobs. I never would have thought it in my youth but I’ve reached saturation point. A good burlesque show in my mind has gotta be a real mix, more like a cabaret – a couple of glamorous girls, great, but then a singer, then a magician, let’s mix it up. Stripper after stripper is boring and it’s missing the point.

Are you still doing illustrations for kids’ books, and is there a particular book you wish you had been the illustrator for?

Yes, I’m currently in the middle of a series of history books for kids, a real dream come true for me. I wish I could have illustrated the ‘Pirates!’ books by Gideon Defoe, they’re completely hilarious and I even wrote to him to ask if he was planning any new editions but I didn’t realise they had that (excellent) Aardman film in development so now all the imagery on them is to do with that version if it, and rightly so. Maybe in another ten years they’ll bring out a new edition and I could do that. I can wait.

Similarly, if you could redesign any album cover, what would you choose?

My producer Sean was in this great band called Moke and their second album ‘Carnival’ is wall to wall classic, a totally overlooked masterpiece, hamstrung by a fucking disaster of a cover, a sort of sub-Pollock mess with silver writing on top, just the worst thing ever. I’d do that over again for ’em free of charge.

How’s your tour stamina these days? And, on the subject of touring, can you foresee any difficulties when setting up/checking for what could be perceived as two bands?

No idea – ain’t done one in five years. Let’s find out! As for the two-band thing, I assume you’re referencing a sort of Devin Townsend-type scenario whereby you get one set of the heavy stuff and other of the soft stuff or vice versa…I don’t think so. It seems a bit self indulgent to me.

Where do you go from here? You seem to be awash with inspiration at the moment, and blessed with a life that offers you no creative boundaries…

Well like I say I’ve got these history books to contend with, that’s going to take up a lot of next year. As for more singles off this record, that’s up to the label, and more shows depends on the right offers/bands. I have got a lot of ideas at the moment, so who knows which ones will come to fruition. As for no creative boundaries…isn’t that true for everyone, really?