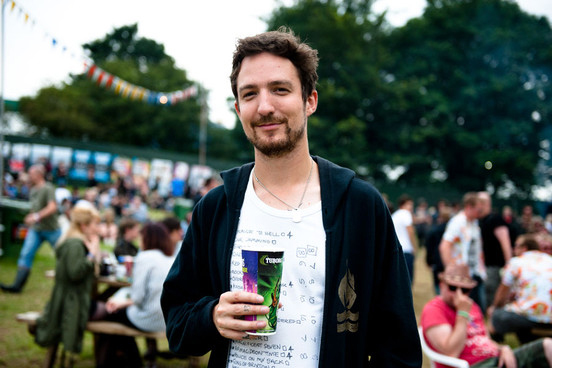 Frank Turner is tenacious. Shunned by followers of his previous work, adored by many for his present, he has dredged his way from the toilet venues of the UK to arenas his local football team won’t play. This is, of course, because Wembley Arena isn’t equipped for the hosting of association football (some would argue the neighbouring stadium isn’t suitable either; its grandeur in no way reflective of the current national team’s ability, the cynics).

But whatever the vidiprinter speaks of other contests, Frank seems to be winning his own. It is with this in mind that we caught up with him at a Reading Festival I have ever-narrowing odds on him headlining in the next three years. However his slot today was, for a while, touch and go, as news spread of a ruptured disc in the target man’s upper back…

James McDonald So how did you hurt your back, apart from on the rock of everyday hostility?

Ha, well, yes, it wasn’t a specific incident that screwed my back; it just came on over a month and reached the point where I couldn’t really stand up anymore. I’ve been to see this amazing physio who watched a bunch of footage of me playing live, then looked at my past tour schedule and said, ‘right, this is how you screwed your back’… so he’s sort of retraining me how to stand and walk and all this shit. I do this thing naturally on stage where I just hammer the fuck out of my right leg and I have actually broken stages doing it before, so, who knew that years of doing that and sleeping on a tour bus bunk would mess me up? But I’m glad that I’m still going to do the show, Reading is very close to my heart.

Yeah, and the one thing I feel this year – I’m weary of sounding like a broken record with the whole thing – obviously I did come from playing to fuck all no one and all that shit, but at the same time my self-conception as an underdog is getting slightly more tenuous. I’ve got a ‘top 2’ album and I’m playing the main stage, that’s not very underdog anymore, but at the same time I feel that’s where my mentality comes from. Let’s say, if you’ve spent fourteen years playing in the underground and then one year playing in the overground, which is going to influence your thinking more? Or, at least, I’m not going to become a massive dickhead just because I’ve done a year of big shows. At least, I hope not… maybe I’m kidding myself?

James McDonald Can you feel on a given day the way you want to?

Haha… well, there are moments when things sometimes get hectic to the point of numbness, the cycle of get up, do food, do press, do sound check, do show, go to bed, get up… and I kind of do my best to pull myself up if I start to feel like I’m auto-piloting because that’s the last thing I want to do. The reason I want to do this for a living is that it’s exciting, it’s interesting and so I pull myself up when I can, and I’m lucky to have friends who can help me do that too. They’ll just say ‘shut the fuck up man, you’re doing everybody’s dream job’ and I know that I am the luckiest motherfucker in the world to be doing what I do, and yes, I still enjoy it.

James McDonald So then, are you only working here because you need the fucking money?

Ha, well, I’d be foolish if I was because there are many easier ways to make money in life I can tell you that. But nah man, it’s a joy to have the opportunity to do this – I’m a lucky bugger.

James McDonald So, apparently a degree in European History is enough to piss of the Guardian…

Apparently so. I mean, that whole thing, it was a tough six months to be honest with you. I’m not going to sit here and say ‘I don’t care’, because it was hard being – in my opinion – misrepresented and castigated from all sides. The one thing that I would say about it – if I can say this without sounding too up my own arse – is how I had to stand my ground. I didn’t issue an apology or a retraction or do penance working for a charity or whatever people do when they’re subjected to character assassination in the press. I went with, ‘this is what I think and fuck you if you don’t agree with it’, to me that’s what punk rock is all about. One way of phrasing what happened, which really puts the wind up some people, is that I expressed a ‘counter-cultural opinion’ and then I stood by it, and people fucking hate me for it but you know what, just get over it. This is who I am. This is what I think. All of my politics comes from punk rock and nowhere else.

James McDonald And to then be vindicated by Billy Bragg…

Well I’ll always be eternally grateful to Bill for that as I didn’t ask him to come forward, he did it out of the goodness of his own heart and I believe he’s a good, solid human being.

You often refer to yourself as an entertainer before being an artist, do you think that ever influences how you approach your writing?

Good question… and these days I think I’d have to say no. I think there are two separate parts to what I do, art and entertainment, and in the studio it’s a purely artistic endeavor. I guess part of the reason why I stress the entertainment thing is because a lot of bands let that fall by the weigh-side and don’t talk about it enough, but I’m proud to be an entertainer… but also I’m weary of saying to people, ‘Oh, I’m an artist’… it’s such a lame thing to describe yourself as to my mind, but then I do make music and in that I’m trying to make art.

It’s hard to focus on the art, and then play, like the main stage at Reading I guess…

Ha, yes, well the thing to factor in with any festival set is people’s attention spans… like, today, people have already seen ten bands before you come on, so it’s probably not the best time to do the ten minute experimental sad song… and it applies to me as well, in the set maintaining energy and concentration. I just need to try and give people that sugar rush.

Nadia Mendoza I was just wondering, after the Olympic performance last year, if anything to you can mount up to that?

Haha, well, I didn’t feel particularly gravitas about that performance… don’t get me wrong, it was a fun time, but the reason that I did it was because it was a unique experience and I’m always interested in doing new things with new people… how many times am I going to get a phone call saying, ‘do you want to play the Olympics’, y’know? But it was barely even a proper gig… we played three songs and there were no people in front of us, there were actors playing cricket… obviously there were plenty in the stadium but they were far away, and just before we went on a guy with a clipboard goes ‘there are x million people watching on tele’ and I’m like ‘don’t tell me now, tell my afterwards you dick’. I’m glad to have done it and I’m not really a nationalist in any way but there was something in me that was stirred a little bit, a flicker in the embers of my blackened, dead heart.

But yeah, I’m glad to have done it but I’m reserved, because I don’t want it to be the most exciting thing that has ever happened to me, and it was weird looking back on it. There were a lot of sides that were very uncomfortable to be honest… we all had to have background checks and shit, they insisted on unscrewing all our guitars and amps to check for bombs… we were still on tour right up to that show, but they wanted us to drop off our equipment two weeks before, which was, like, ‘what? We can’t really do that…’ Anyway, it was all very weird. That whole State ‘bully boy’ sort of thing is not really to my tastes.

Were you not tempted to play ‘Thatcher Fucked The Kids’?

Ha, well, to be honest, the whole thing was very much managed by Danny and he picked the playlist… but that was cool, he’s a lovely guy and weirdly, an insane mega-fan for what I do… like, he knows the b-sides… the first song I ever did was ‘Sailor’s Boot’ and he suggested that, and I was like, ‘wow, this is humbling’. He’s one of those people who is just buzzing with enthusiasm and energy and you can’t help but be excited about things when you’re around him.

Nadia Menodza Given some of your lyrical content, do you find it hard to be open when you write, or do you often end up a little more guarded as a result?

It’s different when I’m recording and in the studio to when I’m writing them… for me, I really like honesty in music and that’s the quality that I’m always looking for and that I enjoy… one of the biggest influences on my lyrics is Arab Strap, it’s about that baring of the soul, it says something that you can’t take back and so I try and do that in the studio, and particularly once you’ve done the last track it’s like, ‘fuck, I’ve actually got to go and sing this to people now’, or ‘loads of people are going to listen to this and psycho-analyse it’ and at times it makes me feel uncomfortable, but the thing is, if you’re writing music to be comfortable, well, you’re either an idiot or you’re in a pop band.

James McDonald Is there anything happening with Mongol Horde at the moment?

Actually, yeah, I’m recording the vocals for the album on Monday… the music’s all done but this is the first time I’ve been able to lay vocals, and then we’re going to mix it, which will probably take a lifetime as we’re three extremely opinionated narky fuckers. Hopefully we’ll be getting it out at the start of next year. 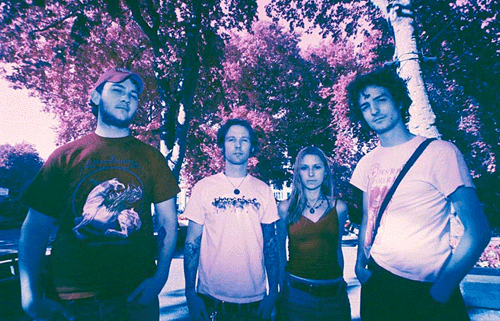 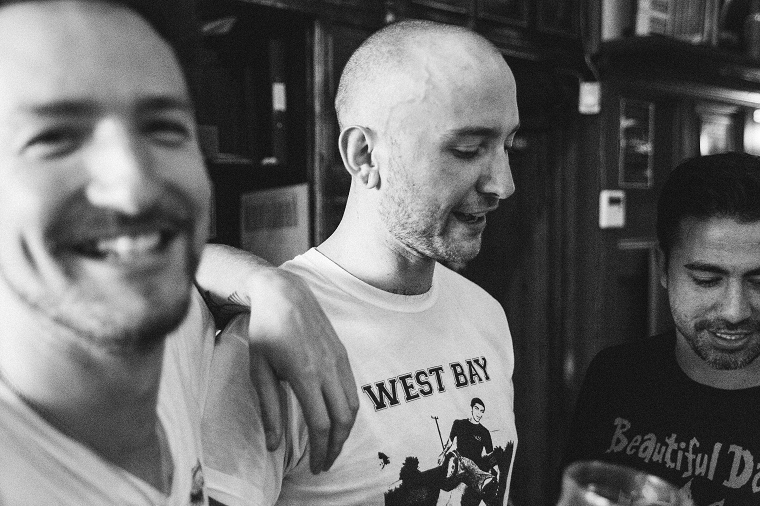