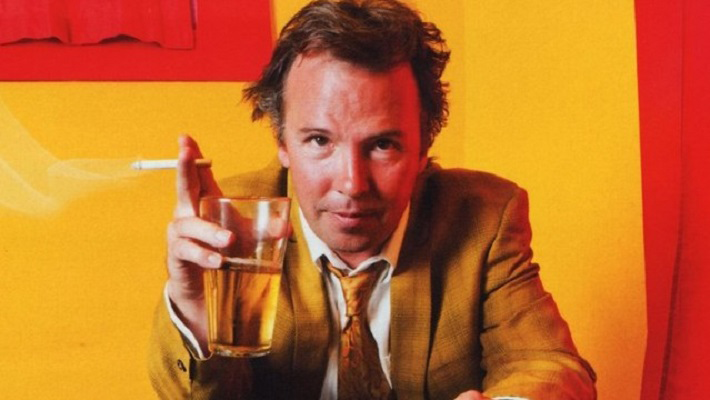 In a field crowded with conformists and copycats, Stanhope is a genuinely original comic voice, albeit a gleefully vulgar one. His confrontational rants encompass caustic social commentary, outlandish first-person narratives, graphic sex and perversion, often within the same sentence. Fueled by equal amounts of anger, outrage and alcohol, Stanhope rails against western civilisation’s slide into apathy and stupidity, always on the edge of implosion yet fully in control and never afraid to risk alienating his audiences. I speak to Doug somewhere between Aylesbury and Newcastle, the third destination on his forty-date UK tour to push his tenth DVD, ‘Before Turning The Gun On Himself’ (view in full below). Let’s start the interview with another number…

So, you’re currently covering the 265 miles between venues today, how are you feeling?

‘Excellent. I’m not driving so it’s okay, I’m here with my girlfriend and Henry who’s opening the show, so we’re just kicking back swapping war stories… but we’re into the routine now. The first couple of shows were fun, but you’re always trying to work stuff out, see what will gel… but by the end it should be perfect. Actually, by the end of it I’ll be so bored with whatever I worked out I’ll never want to say it again.’

This is a huge tour man, have you been looking forward to it or is it daunting to see on paper?

‘It’s long enough to not pay attention to how long it is; it’s just, ‘where are we going today?’ But the fact that we’re moving every day makes it a lot more fun than sitting for five weeks in Leicester Square. I’m not big on the whole tourist thing – taking pictures – there’s nothing I really need to see.’

Hey, I wanted to ask you about your slot in Louis, how that came about.

‘Ah, well last year I was in the UK – March/April time – and when I got back I just had a message from him asking me if I did any acting, and I said no because I suck at it as I have no business sense. Anyway we spoke via Skype and he offered me the part… I don’t want to make a habit out of it. I mean, it was fine doing it with him but I’m not big on acting, it’s a lot of fucking work. You get spoiled as a stand up because you don’t have to put in fourteen-hour days to film eight minutes of dialogue.

So you’ve no fear of being typecast?

‘Nah, if I play a character that’s very similar to myself, that’s about my range, so I’ll stick with that.’

So you’re turning the gun on yourself, which obviously makes for a great headline; ‘Doug Stanhope tours Before Turning The Gun on Himself’…

It’s a laugh a minute… there are some sad moments, some introspective moments; almost saying you’re getting too old for this shit, you don’t believe in the messages and the revolution you did when you were fresh faced…

‘Well it does get frustrating when you had a really good bit about something – like gay marriage – and then it’s everywhere on the news and you’re like, ‘I’ve done that, I’ve already addressed it’… we need more and different problems in the world. The more shit you talk about the less shit there is to talk about. I’ll probably eventually just become some boring Jerry Seinfeld because that’s how life goes. I’m not gonna be sixty years old screaming about shit – or maybe I will – I don’t know if I’ll even make sixty.’

If not, you’ve had a good crack at it… this is now your tenth DVD. What does that say, apart from you’re using a lot of plastic?

“The more shit you talk about the less shit there is to talk about. I’ll probably eventually just become some boring Jerry Seinfeld because that’s how life goes.”

‘Nah, it’s okay… there’s a lot of friends that we’ve made, it’s just that ones I don’t know that I assume hate me… It isn’t a place I’ve always wanted to be in that there’s no place I’ve always wanted to be, but I just knew I had to get the hell out of LA and this is a place I’d been before… It’s a great trade off from that other life. I guess ultimately you just need to leave your shit somewhere though.

Where I am now is a good contrast; I don’t like cities, traffic… I live my life to avoid it. I’m a road comic so I don’t need to be there, why would I live in a place where I don’t want to go outside? There was really no reason for me to be there because I don’t want a television career… it’s a place where they just throw money at you to do dumb shit. I don’t want to do dumb shit anymore, so that’s why I had to get out, to a place where there are only two stop lights which are always green. The parallels between the chaos from being on the road and the tranquility of home are absolutely necessary.

Do you get the chance to watch any TV while you’re over here?

I tried to watch TV for five solid weeks during the London shows, but mostly it was just flicking through channels trying to find something to watch other than Friends. So I just watch the news – all the American shows you have over here is shit people don’t wanna watch in America.

So the five weeks you held at the Leicester Square Theatre… it was a few months back, but getting that residency must be a pretty good validation of what you do?

In theory, but in practice it’s like constantly being in Times Square, all the people and the noise and the traffic, so in theory it’s nice I can do that in my career but I’d rather not. I’d much rather be doing what we’re doing now, just going town to town and it’s different every night, then you just put the shame in the rear view mirror and get the hell out of town. I haven’t been to most of these places and I’ll probably never be back.

To finish, I was just wondering if you ever actually have some material in mind before your set, or is it all largely down to blood alcohol levels?

I generally just figure out what to say then decide not to say it.

Here’s what was left in…

‘Before Turning The Gun on Himself’ is released on 12th March via Roadrunner Comedy, alongside Killswitch Engage the Holy Grail, and Carry on Slipknot-ting, assumedly.