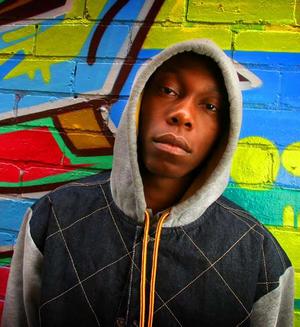 We were fortunate enough to spend a few snatched moments with Dizzee Rascal before his set that night, during which time it became starkly apparent that neither my informal style of interview nor my choice use of the vernacular were to his immediate tastes. After the initial rapport building chit-chat, (‘how long did it take to travel down?’, ‘nice rider, were any of these cheeses requested?’) he abruptly asks when the interview is actually going to start. Now, given that our guest had only been on site for fifteen minutes prior to the meeting, having immediately been greeted by the sight of a swelling press cue outside his Portacabin, I should have expected a more clinical slot.

Given the volume of eager reporters outside (all of whom had to be ‘paired’, excluding yours truly, to save precious time), quick changeovers were clearly in both his and his burly minder’s, erm, mind. Unfazed and heedless, I get down to brass tacks.

After the success of ‘Dance With Me’, many people were asking where you were going to go from there; now ‘Bonkers’ has smashed it out of the commercial waters. What’s the next step?

‘I’ve got a new track that Calvin Harris has produced again, with an electric/R&B kind of vibe to it. It’s called ‘Holiday’ and it’ll be coming out in August’.

You’ve already proven a winning formula with Harris, is there anyone you’d particularly like to work with in the future?

‘It’d be good to work with the Prodigy, get something banging out with them’.

As a general comment, how content are you with the music you’re putting out at the moment and who you’re working with in that process?

‘I’m really happy to see the build-up; I was making kinda rough and edgy music in the beginning and still looking for credibility. Now I feel I’ve done alright with it, especially as I’m an independent artist so I’ve had to do a lot of the work on my own.’

So, as a final thought, I’d like to understand where you think this is all of this heading? What are you hoping to achieve from your career?

‘I don’t know where all this is going! I’m just looking to be as big as I can and entertain as many people as possible; I want to go down as big as the greats, like The Beatles’.

With a growing sea of avid student reporters staring daggers into the back of my neck, I halfheartedly assure the man himself that he is making sizable strides in achieving such greatness, and leave to limber up before competing with the crush of the photo-pit.

A confession; I have little experience in working or merely liasing with rap artists and the like, although I’m told that more than with any other musical breed there is a lot of ‘face’ involved. Dizzee was open to refer to himself as a pop artist, however his style and ambition are in keeping with the stereotype. There was a brief moment of pause when he revealed he’d like to name McCartney and Lennon as his peers, holding to see if he would follow the comment with a laugh. It wasn’t forthcoming. Then again, what’s wrong with such ambition? I have the utmost admiration for him, not necessarily as a result of his current musical output, more that when on-stage any pauses between tracks can be counteracted by three simple words; ‘make some noise’. These magic utterances, reinforced by a microphone aimed at the crowd, never fails to elicit a hysterical response from thousands, always on cue. Say what you like, but any person who is able to strike such a response so effortlessly would’ve been on the stake not too long ago. Well, hundreds of years ago, but you get the gist. Tonight, in front of easily the biggest crowd at this year’s gathering, this harmony between showmanship, pride, and a generous sprinkling of face was compelling to witness. He is uniquely compatible to an audience of this size, his gusto transferring four-fold from stage to crowd. The opening beats of ‘Bonkers‘ are greeted with epic ecstasy, a flare is lit in the crowd, and the rest may well have been history.